I got this hilarious (cook)book from a friend, called “Fifty Shades of Chicken.”

It is a parody on “Fifty Shades of Grey,” but is all about chicken.  It takes the tone of the original book, but if you read closely, actually has chicken recipes in it, too!  It is very funny to read…spices up your time in the kitchen.  I recently made a recipe out of it that was delicious, called Roasted Chicken Thighs with Sweet and Sour Onions.  I made a few personal changes (like using half the chicken and onion amounts, using chicken broth instead of wine, and using ground cinnamon instead of a cinnamon stick), but loved the overall flavor.  I will definitely make this again.

Oh I don’t know how summer has gotten away from me already!  We have had a heat wave in Boston, which makes me not want to heat up the stove.  Well hello there, grill!  I made some grilled chicken this week that was perfect for summer… it has a fruit juice base which makes for great flavor.  Hope you enjoy it!

I love Mexican Food, but often find that store bought corn tortillas often fall apart.  So, I tried to make a Mexican Chicken Casserole that I could have for dinner that didn’t need a corn tortilla.  I like the base that I created, but would definitely change a few things next time I make it.  Next time, I would add a little cilantro, salsa, and sliced avocado.  Then I think this recipe would really pop.  But here is take one…

Oh what a treat this meal was!  I was dreaming of a sweet and salty chicken dish, and this came together in my mind.  I bought good quality turkey bacon which came in thick slices and made the dish that much more hearty.  Hope you enjoyed it as much as I did.

Here is another recipe from my mom’s kitchen!  She is such a fabulous cook and I love sharing her creations with you.  Here is her latest delicious offering from Mom’s Kitchen.  Enjoy!

When I feel like something hearty for dinner, I tend to think of rice and pasta.  Risotto is a great alternative to pasta and is gluten free because it is really a rice.  And, you can come up with so many different variations!  This week, I sautéed a lemon pepper chicken breast and put it over risotto mixed with peas and lemon zest.  It was a great hearty winter meal, and gave great leftovers. 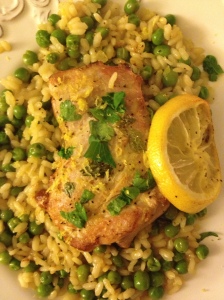 I LOVE curry chicken… the kind from your favorite local Thai restaurant.  I love the color, flavor, and the sauce that just goes perfectly over white rice.  Here is my first attempt at my own version.  Not perfect, but decent flavor.  I want to try again soon… any suggestions are welcomed!

I have never caramelized leeks before and wanted to give it a try.  So, I came up with this chicken recipe where the leeks could really shine.  It was a very easy dish to make on a weeknight and I will definitely be making it again! 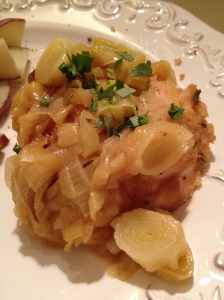 Sunday afternoons are when I clean the house, make lunches for the week, and enjoy some time to gear up for the always busy week.  I do love cooking, but sometimes I also love just throwing some ingredients in the crockpot and letting it simmer while I enjoy my Sunday afternoon.  So this week, I did just that.  The result was a delicious Sunday night dinner with very little effort!

Honestly, I was never a big fan of bacon.  I would much rather have sausage with my breakfast.  However, since being gluten free and having to expand my fridge staples, I have tried to find more ways to use bacon because it is a safe food for me.  I thought of this chicken recipe and was pleasantly surprised at how good it was!  A great dinner idea for a cold night… and it is very easy! 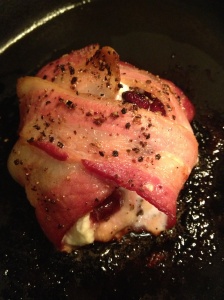