Ok, here is the last of the pumpkin recipes… for now at least!  I recently made risotto, and used apple cider to cook the rice instead of traditional chicken broth… it was delicious!  The flavor was full and rich… and I topped the risotto with dried cranberries and a scoop of pumpkin puree.  This is a great fall recipe! 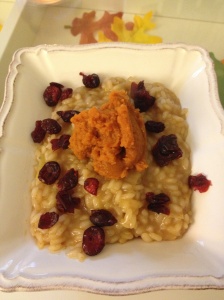 One response to “Apple Cider Risotto with Pumpkin”